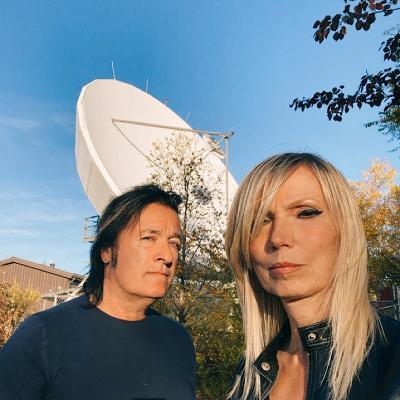 With seven albums and numerous featured tracks in movies and television under their belt, Universal Honey is a mainstay in Canada’s music scene.

​Platinum recording artists Johnny Sinclair and Leslie Stanwyck have established a songwriter partnership that has ranged across three decades, 100+ tracks, and hundreds of gigs across North America.

​Working as independent artists in a true DIY model enabled Sinclair and Stanwyck to realize a musical vision established during their early days in The Pursuit of Happiness (“I’m an Adult Now”/Chrysalis Records). In describing their sound, USA Today music writer Ken Barnes said their Vicious Circles album contained “Straightforward melodic delights that have been in sadly short supply so far this century.”

​Creatively renewed by the musical challenges created by the pandemic’s arrival, Universal Honey’s “relaunch” began unfolding early in the year, with the first digital issuance of their estimable Magic Basement debut. A lush, orchestrated power pop release that reflected all Sinclair/Stanwyck musical influences, with performances by some of Toronto’s finest rock talent, Magic Basement yielded the indie hit “Just Before Mary Goes,” whose popularity resonates even today, thanks to an appearance on the Girls Go Power Pop compilation on Ace Records UK and airplay on the BBC.

​A multi-year tour with the Goo Goo Dolls followed, with Universal Honey issuing the rocking Earth Moon Transit record as a perfect soundtrack for playing hundreds of arena & club gigs and putting hundreds of thousands of miles on the road.

With more than 10 singles receiving airplay and numerous song placements appearing in film and TV scores, Sinclair and Stanwyck even won a CASBY award as Best New Group.

​In 2003, they recorded and released a Christmas Album with11 original tunes that still receives holiday airplay in the US, Canada, and Europe. Rock ’n Roll Hall of Famer Ronnie Spector even covered “Best Christmas Ever” for her 2010 holiday record.

After taking an extended musical and business break to establish a family and relocate themselves from Toronto to Sinclair’s family home in Saskatoon, Universal Honey found themselves creatively recharged in early-2020, taking advantage of unanticipated downtime from other musical projects to start their own production house and record label, Honeytunes.

​With Honeytunes, Sinclair and Stanwyck are dedicated to helping “up the game” of emerging musical artists by honing their song writing and creating top-notch recordings with unique and high-quality production.

​The emergence of the Honeytunes imprint coincided with their efforts to fully released the Universal Honey catalogue across all streaming platforms throughout the 2020-2021 calendar years. This year also sees an update to their Can’t Stop Thinking About Christmas release, with the addition of three new Christmas Classics covered by Sinclair and Stanwyck that also feature drummer Don Kerr (Ron Sexsmith, Rheostatics).

​While celebrating Universal Honey’s past with archival performances streaming on the band’s social media platforms and webpages, Sinclair and Stanwyck are committed to creating new music.  As a result, their new single “Just Like U” is scheduled to be released October 22nd.  They are also currently in the studio recording a new album which is due to be released in spring 2022.